In Turkey, the wrecks of the Dardanelles are revealed in an underwater park 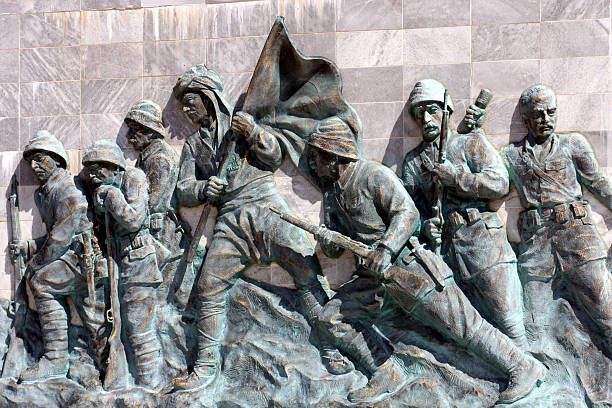 It’s a time machine: In Turkey, an underwater park takes divers to the wrecks of 14 British, French and Australian warships sunk in the Dardanelles Strait during World War I.

The site, located in the Gallipoli peninsula, in northwestern Turkey, was the scene of the fierce Battle of the Dardanelles which pitted British troops (made up partly of Australian and New Zealand soldiers) and French troops against the Ottoman forces. supported by Germany. These wrecks, « it’s a time machine that transports us to 1915 », enthuses Savas Karakas, documentary filmmaker and confirmed diver, interviewed by AFP.

Further on, the park extends over 150 km³, the HMS Triumph, sunk with its 73 officers and crew members on board, lies 70 meters deep. « I thought about when they sank, it makes you feel the stress of war, » says Ali Ethem Keskin, a professional underwater photographer. « The most fascinating thing is that they [the wrecks] are still there but they will disappear one day, so we are very lucky to be able to see these remains », he underlines.

« It’s a part of history that rests here. Every ship is a medal on our chest. »

The underwater park joins world-famous dive sites such as Chuuk Lagoon, Micronesia, which contains dozens of wrecks of Japanese ships sunk during World War II, or Bikini Atoll, former US nuclear test site now popular with diving enthusiasts for its fleet of US Navy vessels also sunk during World War II. « Now Gallipoli is an alternative, » slips Savas Karakas. « It’s a part of history that rests here. Every ship is a medal on our chest. »

In 1915, Allied troops landed on the Gallipoli Peninsula, the start of an ill-fated campaign to wrest the Dardanelles Strait from the control of the Ottoman Empire. Control of the Dardanelles, an arm of the sea of ​​about sixty kilometers separating Europe and Asia, was to allow the Franco-British forces to establish a maritime link with Russia. But the expedition ended in a crushing defeat against the Ottoman Empire and left more than 100,000 dead, according to historians’ estimates. This campaign is of symbolic importance for the Turks and was founding for many young Australians and New Zealanders who fought there for the first time under their national flag.

« I dived with an Australian: a wreck that wouldn’t necessarily have interested us caught his attention. He wanted to go back there again, saying that part of the story had happened here, that injured people had may have been transported on this ship, it was an emotional moment for him, » said Ercan Zeybek, a diving instructor.

« You’re already breathing in the scent of history above the waters. Now divers will be able to fathom history underwater. »

Access to the area was restricted until 2017, recalls Ismail Kasdemir, president of the historic site of Canakkale. « There was all this history and this treasure under the sea for more than 100 years… The diving community was curious. With this museum, it will become a diving destination », he convinces himself. Especially since the province of Canakkale, home to the ancient city of Troy, has long attracted visitors from all over the world. “You are already breathing in the scent of history above the waters. Divers will now be able to probe the history underwater,” enthuses Derya Can, holder of a world diving record.

For Savas Karakas, diving into these waters takes on a more personal flavor. His first name, Savas, war in Turkish, comes from the Dardanelles campaign. « My grandfather was in Gallipoli in 1915, he was wounded in the battle, » he says. « One of his hands was burned, it scared me when I was a child. Every time he tried to touch me… I looked at his hand and I felt a little weird, » he continues. « When I dive, I think of his hand. The rusty steel looks like his hand burned from the shells fired by those warships, so it’s a bit like holding my grandfather’s hand. »