Executive Manager EMEA of Azkan Group, Mr. Gurbuz, was on the TV set of Michel Field, LCI French channel, to comment the news of Turkey. 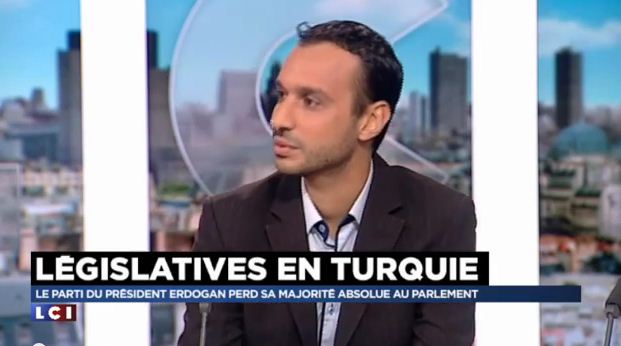 At the end of the elections on Sunday, June 7 2015 in Turkey, the party of President Erdogan, the AKP, has lost its absolute majority in parliament, give way to the pro-Kurdish party, the HDP.

This is the first time since 2002, that the AKP has not won the majority and lost 10% of its electorate, facing the HDP. Now, a coalition will have to do, although that is not pleased with the two sides.

The below video is an extract from Azkan Group, on LCI TV set.

The principal theme was the legislatives in Turkey, and the rise of the pro-Kurdish party in the country. That’s why, several speakers took the floor to analyze the current political situation in Turkey. On the TV set : Bernard Guetta, international political columnist for France Inter; Murat Polat , responsible for external relations of the Kurdish Democratic Council of France , and the leader of Azkan Group.

Being also vice president of the Franco-Turkish Chamber of Commerce, Mr. Gurbuz spoke on the economic part of the subject and especially on potential reasons for the decline of the Turkish currency. Indeed, the 8% drop of the stock market and the rate cut announced by the central bank were influenced by the current political context, but according to Mr. Gurbuz , the country’s economic situation is not in danger from these instabilities, and Turkey still remains in a golden age period. Also with a business plan that is established until 2023 and which provides a degree of durability in the country, Turkey’s economy will not be disrupted by the political unrest of the moment.