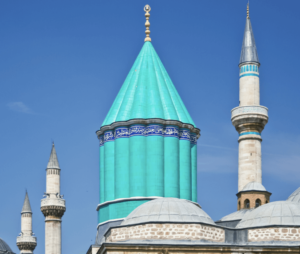 Inane Gurbuz, Executive Manager EMEA of Azkan Group and professional coach in Turkish Management, shares an excerpt « Religion in Turkey » from his book « Doing business in Turkey: a guide to success »

Turkey is a Muslim country. However, a huge paradox exists:
many Turks are not practicing Muslims and Istanbul is the example
of this. In Western perception, however, Turkey seen as a very religious country, in line with the Arab countries.
In fact, there are two facets: that of west Turkey, which is liberal and
pro-Western, and that of the centre and east, which is more conservative.

These two worlds coexist in perfect harmony. You will be surprised to
find that after tea, one of the most popular drinks in Turkey is raki (ananise-flavoured alcoholic drink) and Efes Pilsen (the local brand of beer).

Aspects of Religion in Turkey

With 76 million inhabitants, Turkey is a secular republic that is
99% Muslim. Mustafa Kemal Atatürk, who was opposed to Islamic
tradition, secularized the state in 1928, gave woman the right to vote in 1935, imposed the Latin alphabet, banned the veil in civil
servicepositions and schools, and closed certain religious sites. Since
then, many of these bans have been relaxed.
The majority of Muslims are Sunnis (80%) together with 10 to
15 million Alevis, a liberal branch of Shiism. Sunnis are the majority
religious groupin the Islamic world: over 90% of Muslims are Sunnis.

It is surprising to see to what extent some Turks are practicing
and others much less. There is a real Turkish antagonism in the
practice of the Muslim religion.
A few years ago, during one of my trips to Istanbul, it was the
beginning of the month of Ramadan in July. During the summer, the
fast was broken in the late afternoon. It was interesting to note that
during the day, the restaurants and fast food stands were packed. In
the early evening, I went to a corner store to buy a small bottle of
fresh water, and I was surprised to find that the fridge was full of
water bottles but that the water was still warm. When I commented
on this to the shopkeeper, he replied, “When the fast is broken, all
my bottles sell immediately!”.
Turkey and its relationship with Islam is a reflection of this story:
it is a truly divided country where many peopleare not practicing
Muslims, while another part are very conservative. What is most
extraordinary is the tolerance people show foreach other, with nobody trying to preach to their neighbour.

3. Religion in the workplace

Religion is a relativelytaboo subject within the workplace, and you
could spend many years working alongside colleagues without ever
knowing theextent to which they practice their religion.
For example, I did consultancy work for a leading company in
the manufacture of bakery ovens in Britain, andI spent several days
working alongside the Managing Directorand his export manager. As
always, my Turkish hosts were impeccably dressed (it is essential to
be well presented in Turkey!) with ties, and tailor-made suits. All
the more so as they knew the English market well and followed it
carefully. One day, between two appointments, they mentioned how
much they enjoyeda good glass of wine.
Gradually, the subject of Religion in Turkey came up, and the Managing
Director said that he always didhis five daily prayers. The
export manager couldn’t believe it! Over all the years he had spent working for the company, he had never realized that his manager was such a practicing Muslim. And he repeated his astonishment several times.