Algeria and Turkey, allies in search of a common strategy 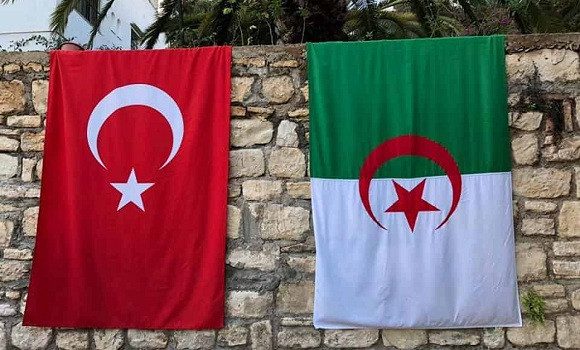 Always eager to assert his international stature, President of Algeria Abdelmadjid Tebboune has been on an official visit to Turkey since Sunday May 15 and until Tuesday May 17. On the table, several files, including the strengthening of trade relations, but also the question of the abolition of visas between the two countries.

On Sunday May 15, the Algerian Head of State, Abdelmadjid Tebboune, arrived in Ankara for a three-day official visit. This Monday, May 16, he met his Turkish counterpart, Recep Tayyip Erdogan, in order to “consolidate political and economic relations” between the two countries, reports the pan-Arab news site Al-Araby Al-Jadeed.

While Algiers aims to increase the volume of Turkish investment in the country, Turkey, for its part, wishes to strengthen its presence in North Africa and the Sahel – regions with high economic potential – through a strong partner. The day after President Tebboune was elected to lead the country in 2019, his Turkish counterpart was the first foreign head of state to visit him in Algeria.

Turkey would thus like to play a role in Mali and Niger, especially to thwart the French presence in the Sahel. “Turkey’s desire to expand its political presence, ensure its economic interests and secure African markets, which it has wrested from the traditional powers on the continent, notably France, intersects with the gradual return of Algeria in its Arab and African depth”, sums up to the Arabic-speaking media Idriss Rebbouh, political analyst and president of the International Algerian Association, based in Istanbul.

Investments, visas and diplomacy
During his meeting with Algerians living in Turkey, Abdelmadjid Tebboune indicated that Algeria was at the forefront of the countries benefiting from Turkish investments, reports the Turkish Arabic-language news site Daily Sabah. “Turkish investments have reached more than 4 billion dollars (3.85 billion euros), and trade between the two countries is between 4 and 5 billion dollars per year (3.85 to 4.81 billion euros)”, declared the Algerian head of state.

Still according to Al-Araby Al-Jadeed, Turkey would like to take advantage of the visit of the Algerian president to obtain the abolition of visas. Until now, Algeria has always feared the return, through Turkey, of Algerian jihadists who left to fight in Syria alongside the Islamic State.

The quarrels between Morocco and Algeria were also invited during this trip. Indeed, before the arrival of President Tebboune at Esenboga International Airport, Turkish diplomacy quickly denied the assertions of certain Moroccan media close to the palace – or the « Dar el-Makhzen » – according to which Turkey would support the initiative on Western Sahara, reports the Algerian news site La Patrie news.