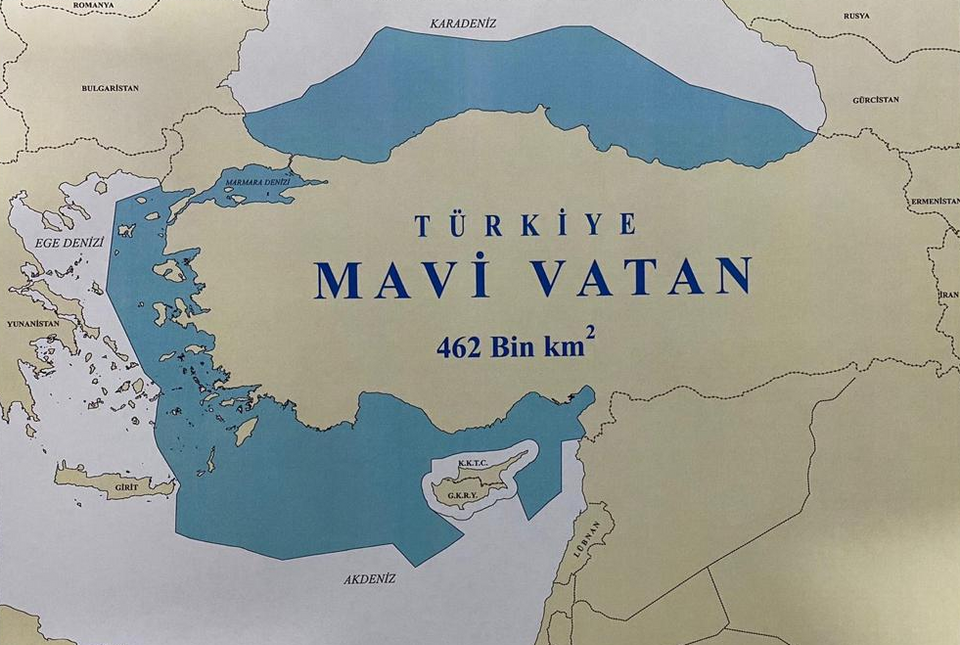 For the past month, relations between the two neighbors (Greece and Turkey) have again been poisoned by the Turkish doctrine of the « Blue Fatherland », the maritime zone claimed by Ankara. The Turks are particularly interested in its gas potential.

The relief will not last. After a short period of rapprochement between Turkey and Greece – both members of NATO – at the start of the war in Ukraine, the dialogue between the two countries has returned to a standstill. In the uniform of commander of the Turkish armed forces, Recep Tayyip Erdoğan, on June 9 demanded from Greece the disarmament of certain Greek islands in the Aegean Sea, invoking treaties made between Ankara and Athens.

“I’m not kidding […] Greece has violated the status of these islands and must disarm them. Otherwise, a debate on their sovereignty will begin, ”warned the Turkish president, who was attending a major military exercise near Izmir, on the Aegean Sea. In response to Turkish demands, the Greek Foreign Ministry denounced Ankara’s « revisionism » and considered that Turkey’s « Blue Fatherland » doctrine threatened peace in the region.

This concept of “Blue Homeland” (“Mavi Vatan” in Turkish), to which Recep Tayyip Erdoğan claims, was developed within the Turkish Navy by nationalist admirals in the mid-2000s. Aurélien Denizeau, researcher in international relations and Turkish foreign policy specialist defines this “Blue Homeland” as “an overlapping geographical area and geopolitical doctrine. According to its theoreticians, it is a maritime sector in which Turkey must assert its rights to have an exclusive economic zone (EEZ). »

Ankara, which does not recognize the United Nations Convention on the Law of the Sea, has historically inherited an unfavorable layout of maritime borders in the Aegean Sea and the Eastern Mediterranean. The « Blue Homeland » map designed by the Turkish admirals aims to remedy this by essentially encroaching on the EEZs claimed by the Greeks and Cypriots. « The main enemy of the supporters of this doctrine is pan-Hellenism, that is to say the fear that Greece and Cyprus are trying to unify their strategies in order to encircle Turkey and block its access to the Mediterranean » , explains Aurélien Denizeau.

The previous peak of tensions took place in the summer of 2020, around the small Greek island of Kastellórizo, isolated more than 100 km east of Rhodes, and only a handful of kilometers from the Turkish coast. A strategic location on the borders of the Aegean Sea and the Eastern Mediterranean, where Athens and Ankara are vying for sovereignty over the seas. After an escalation that raised fears of a military incident around the small island, Turkish and Greek diplomats sat down to the negotiating table to discuss a framework for resolving their age-old differences. But on May 23, Recep Tayyip Erdoğan announced that he was breaking off bilateral meetings with Greece.

A week ago, the 4th ship of the Turkish drilling fleet was named in honor of Sultan Abdülhamid, historical and political reference of President Erdoğan. A new step in the increase by Turkey of its exploration capabilities for underwater resources. « In the Black Sea, Turkey is already beginning to exploit a deposit, but it is above all the potential of the eastern Mediterranean that interests it », observes researcher Aurélien Denizeau.

Ambitions criticized by opposition deputy Hisyar Özsoy, spokesperson for the Peoples’ Democratic Party (HDP – pro-Kurdish left): “In reality, no one really knows if it is possible to derive any economic return from it. The only opposition party to openly attack the concept of « Blue Fatherland », the HDP considers it « completely absurd », insists Hisyar Özsoy. « This doctrine tends to militarize the Eastern Mediterranean, it is based on nationalism, populism », denounces the deputy. “President Erdoğan is using it today to polarize Turkish society for internal political purposes. If you want my opinion, these seas belong first to the fish and octopuses that live there. »