The « meyhane » or « Turkish tavern »: a staple of gastronomy in Turkey 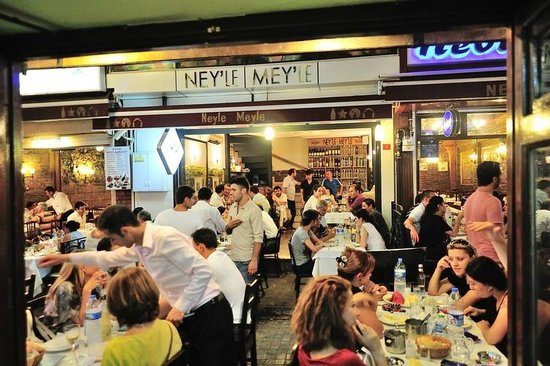 Composed (in Persian) of mey (alcoholic drink, wine) and hane (house), the « meyhane » is a restaurant, or rather, a traditional Turkish tavern.

It is a place where alcoholic drinks (wine, rakı, vodka, beer) are served, accompanied by meze (« mézé » or « mezze ») and traditional dishes. Indeed, at the meyhane, the tables are generously garnished with appetizers (meze), and most commonly washed down with the Turkish national drink, rakı. We go there with friends, with family, to chat, celebrate an event, and often also to forget the daily stress.

A little history of the Meyhane

In the Ottoman Empire, until the 19th century, the meyhane, held by Rûm (Greeks) and Albanians, mainly served wine, accompanied by meze, due to the religious restrictions imposed by the various sultans. At that time, rakı was produced by distilling grape pomace.

It would be a mistake to believe that this turkish cuisine culture appeared in the recent past. In fact, it was already found in Byzantium.

In Constantinople, various drinking establishments also welcomed regulars. They were authorized to sell wine, and to serve dishes cooked with fish or meat, or dishes prepared from legumes.

In the port city many sailors disembarked, often single, who had time and money to spend in frequenting the taverns. When the Turks conquered Galata, these taverns were world famous.

While the Muslim population had generally adhered to religious bans on alcohol, the customs of non-Muslims were unimpeded. Many meyhane were located precisely in neighborhoods where non-Muslims were concentrated, especially in Galata. It is known that some of the customers of these taverns were Muslims who came by « escape ».

The meyhane, places to indulge in the pleasure of eating and drinking, were also linked to the order of the guild*, like all workplaces of the time.

In the 16th century, at the time of Yavuz Selim (1512-1520), taverns multiplied; their culture increased and the consumption of alcohol became widespread, except for a short period of prohibition during the reign of Murat IV.

The culture of meyhane thus continued and amplified in Istanbul, and in the 1830s, they were found in districts such as Yedikule, Büyükdere, Fener, Balat, Kumkapı, Samatya, Tarabya, Çengelköy, Üsküdar.

During the Republican era, the meyhane gradually left Galata to spread throughout Beyoğlu, then their popularity reached Asmalımescit, Çiçek Pasajı, Nevizade. Later, Kumkapı, by the Marmara Sea, also became a district where the meyhane rub shoulders.

Even today, these taverns are known as places to share, to discuss, in an atmosphere embellished with live music.

At the meyhane, the service begins with the cold meze (soğuk mezeler), and continues with the hot intermediate dishes (ara sıcaklar), before the main dishes, and often a fruit platter as dessert!