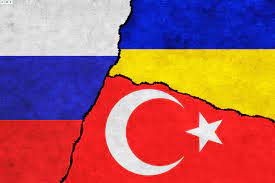 Turkey plays a mediating role in the war in Ukraine. The head of Russian diplomacy, Sergei Lavrov, is expected by his Turkish counterpart, Mevlüt Cavusoglu in Ankara on Wednesday, for discussions on the resumption of Ukrainian grain exports. An ally of Ukraine, to which it provides combat drones, Turkey is nevertheless careful to preserve its image as a mediator between kyiv and Moscow.

Turkish navy ships to demine Ukrainian ports, then escort ships loaded with grain in the Black Sea. This is one of the options considered in these negotiations which involve Turkey, Russia, Ukraine and the United Nations.

Turkish Defense Minister Hulusi Akar said on Tuesday that the discussions had « made good progress », but that they still had to settle the practical details of securing these « grain corridors ». The head of Turkish diplomacy Mevlüt Çavusoglu, he is counting on the creation of a “corridor observation center” in Istanbul.

Vis-à-vis its Western allies, who have so far shown understanding in the face of its refusal to impose sanctions on Russia, Turkey’s position is beginning to become delicate due to the failure of its attempts mediation to obtain a ceasefire between the two belligerents.

President Recep Tayyip Erdogan therefore needs a step forward on the diplomatic front, and he is posing as a mediator in the wheat crisis. There is all the more interest since his country is itself dependent on wheat from Russia and Ukraine, which represented respectively 78% and 9% of its imports before the war.

The plan drawn up by the United Nations to unblock Ukrainian grain exports via a maritime corridor is « reasonable » and requires additional discussions with Moscow and Kyiv to guarantee the safety of ships, Turkey said on Wednesday.

« Various ideas have been floated for the export of Ukrainian grain and the most recent is the UN plan (including) a mechanism that can be created between the UN, Ukraine, Russia and Turkey, » he said. in Ankara the Turkish Minister for Foreign Affairs, Mevlut Cavusoglu, at the end of a meeting described as « fruitful » with his Russian counterpart Sergei Lavrov.

« We consider it reasonable, » he added. « Of course, Ukraine and Russia have to accept it. »

It has been almost impossible for Ukraine to export its cereal products since the Russian invasion on February 24, with Russia controlling or blockading Ukrainian ports on the Black Sea.

Fearing a global food crisis, the United Nations has appealed to the two countries, as well as to Turkey, a member of NATO, to agree on the creation of a maritime corridor.

Any deal could involve a Turkish naval escort for cargo ships leaving Odessa and other Ukrainian ports heading for the Turkish straits.

Sergei Lavrov assured that Moscow would not take advantage of the situation to push its advantage on the military ground. « These are guarantees given by the President of Russia (Vladimir Putin), » he said.