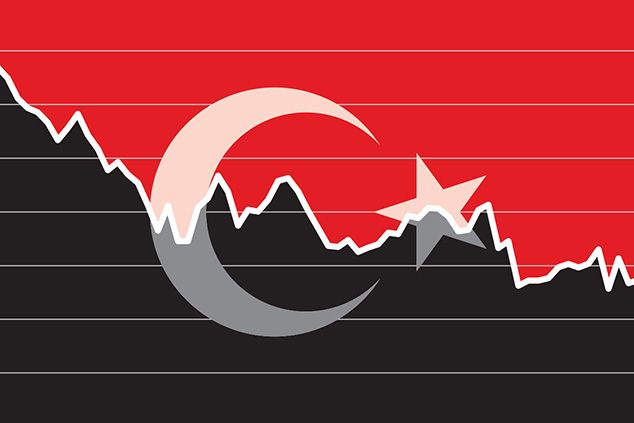 Monetary crisis in Turkey is accelerating.

50% increase in the minimum wage, up to 10 points more on inflation.

Turkey’s currency sank into the crisis on Friday, slipping again, 8%, to an all-time low, in response to another cut in interest rates by the Turkish central bank as the country faces a spiral inflationary.

The Turkish lira fell in the morning to 17.0705 per dollar, prompting the central bank to intervene in the markets to support the national currency. This is the fifth time since the beginning of the month that she has taken such action to fight against what she calls « unhealthy prices » on the foreign exchange market.

Purchases of dollars by the Turkish central bank helped the pound reduce its losses against the greenback at 16.8300 around 12:30 GMT. However, the Turkish currency still shows, since the beginning of the year, a drop of nearly 55% against the dollar, of which 37% during the last 30 days.

Since September, interest rates have been cut by 500 basis points, leading to a collapse of the Turkish lira and an inflation rate above 21%.

Some economists expect inflation to climb to nearly 30% in 2022, due to soaring import prices and a hike in the minimum wage.

« With Erdogan seemingly taking root in his anti-interest rate stance, the longer the monetary crisis lasts, the more Turkey could be beyond the point of no return, » warns Patrick Curran of Tellimer, a firm of investment experts, who considers the Turkish lira to be totally disconnected from the fundamentals.

« As long as Erdogan is in the driver’s seat, nothing will prevent the pound from continuing to depreciate, » he adds, ruling out further investments in Turkish assets.

Before ousting several members of the Turkish central bank, Recep Tayyip Erdogan repeatedly criticized the policy of the issuing body and called for a monetary stimulus to boost exports, credit and economic growth as looming in 2023 a presidential election.

The Turkish president has also announced a 50% increase in the minimum wage to 4,250 lire (243 euros) per month for next year, which should help fuel inflation by 3.5 to 10 percentage points.

« We believe the current mix of policies is essentially unsustainable, » said Maxim Rybnikov, director of sovereign ratings for the EMEA region at S&P Global Ratings.