Erdogan ready for all maneuvers 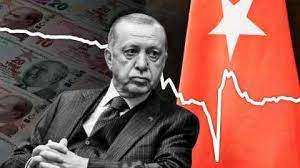 Faced with general discontent, Turkish President Erdogan tries to stay in power at all costs. Indeed, for months, the Turkish economy has been sinking into crisis, the currency is collapsing and inflation is reaching record highs, plunging a large part of the population into hardship or even absolute poverty.

While Erdogan and his party, the AKP, have been in power for twenty years now, the latest polls show them as losers in the next presidential and legislative elections scheduled for June 2023. For him and those around him, everything must be done to avoid this disaster and all political maneuvers are allowed, including that of putting out of play one of the main potential adversaries, whose popularity overshadows Erdogan.

Thus, the mayor of Istanbul, Ekren Imamoglu, member of the opposition social-democratic party CHP, was sentenced on December 14 to two years and seven months in prison and as much ineligibility for “insulting officials”. This condemnation is all the more appropriate as it could allow the current power to regain control of the town hall of the country’s first city.

The trial of Ekren Imamoglu sums up well the methods used by the AKP and its president. Elected mayor of Istanbul in March 2019, after 25 years of AKP mandates, Imamoglu had confirmed his success by being largely re-elected after Erdogan’s camp had succeeded in having the ballot annulled. The pretext for the trial was a polemical response from the mayor a few months ago. To an insult from the AKP Interior Minister, he responded by attacking « the idiots […] who canceled the [municipal] elections of March 31, 2019 ».

The course of the trial itself speaks volumes: the judge who handed down the verdict, known for his closeness to Erdogan, had been appointed only two days earlier, apparently on the decision of the Minister of the Interior himself. same, replacing a colleague in charge of the file.

As soon as the verdict was announced, several thousand people gathered almost spontaneously in the cold on the forecourt of Istanbul City Hall, chanting “Long live freedom, death to tyranny!” and “Government, resign!” « . The following evening, December 15, the protest demonstration brought together tens of thousands of people in front of the town hall, to the point that the leaders of the opposition parties now seem to want to calm their troops.

It has not yet been said that Erdogan will succeed in preventing Imamoglu’s candidacy, because he has announced that he will appeal, and this would suspend the sentence. But the power undoubtedly still has other strings to its bow, and we can expect anything from it, such as increasing the tension, even intensifying the war on the borders and using it as a pretext to postpone the election.

The AKP and the Erdogan clan, if they lose power, fear the many settling of accounts that could follow for their twenty years of embezzlement. It is not said that their increasingly dictatorial methods save them. Workers and the poor do not have much to expect from the coalition that could replace the AKP, which includes the so-called social-democratic CHP party as well as right-wing parties. If they win the elections, they in turn will want to manage the crisis in the best interests of Turkish capitalists.

Sooner or later, the working class will have to demand accountability and present the bill itself to the perpetrators and profiteers of the catastrophe.